A little bird tells me that Eureka Miniatures have permission from Michael Moorcock to do a "Hawkmoon" figures range.


I have seen some test shot casts and a few of the upcoming character greens.

They seem very exciting, representing so far Granbretanian troops - Soldiers of the Wolf, Vulture and Badger Orders as well as Flana Mikosevaar.

As I understand it there are plans to release others of the various orders, many of the main characters (yes, I've seen a green of Dorian Hawkmoon, and he's fantastic) and - wait for it - ornithopters!
The Kamargian Guardians will be there with both the giant Flamingo and horned Horse mounts. It's all there, people!
The sculpting style looks very much like "80s Citadel Homage", but with really nice movement through the figure. Certainly these will not be the rather two-dimensional figures of the old "Eternal Champion" range Citadel originally put out.

Very exciting times. I will put up some pictures of the samples I have, both plain inked and later on (when I've had the time) painted.

Posted by Bloggerator at 8:13 PM 2 comments:

A White-Faced Reaver, or Stealer of Souls. 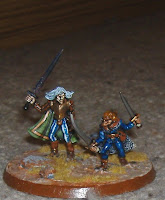 I'd been saving these miniatures for a rainy day and decided to paint them up this week. I painted the Elric figure rougly as he is described in "The Dreaming City" whilst the Moonglum as is he met Elric in "While the Gods Laugh". 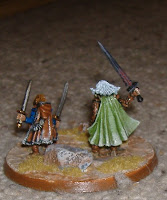 Posted by Bloggerator at 1:29 PM No comments: 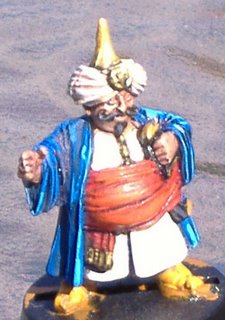 Again, not a part of the core Eternal Champion range, but so cool that I just don't care. 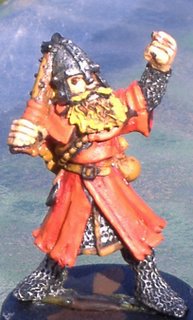 Or a Filkharian Pirate? Or even Brut of Lashmar?

This one isn't even a part of the Eternal Champion line, but looks like a near contemporary and for me its good enough to represent a typical Young Kingdoms warrior.
Posted by Bloggerator at 10:33 PM 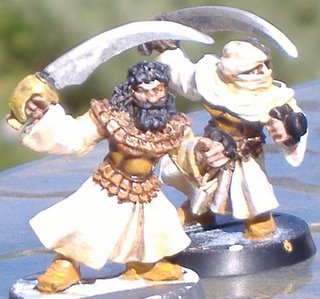 If you've got a sea-captain, you've got to have marines, right? I thought these blokes fit the bill very well, being relatively lightly equipped (all the better not to got straight to Pyaray if knocked overboard!) and not in the Pan Tang MEGA-ARMOUR.

I enjoyed painting these and would like to do some more of them as the black-robed priests Moorcock refers to in "Stormbringer". I really like the bare-headed sword-swinger. Lots of character in that face.

Anyone got some they want to part with?
Posted by Bloggerator at 10:27 PM 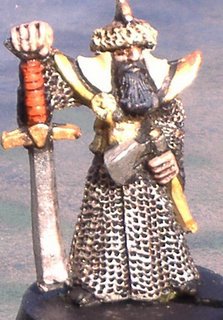 From the Citadel Miniatures 1987 Eternal Champion line. Sadly now defunct and hideously expensive on eBay. I got this one a bit cheaply because he and a few mates had their slotta-base tabs cut off so they could be stuck to some 1p pieces!. I've still got the coins - they might come in handy on that trip to the UK...
Posted by Bloggerator at 10:22 PM

This blog is going to be the repository for all my fantasy-related materials.